Hello! Today, I’m thrilled to welcome a special guest to the Black Creek Growler. Tee Morris is an award-winning author of science fiction and fantasy, as well as a dedicated beer lover. He’s also a dear friend who introduced me to various craft breweries in Virginia. Thanks for stopping by the Growler, Tee!
– Katie

The Black Creek Historic Brewery occupies a unique position on the craft brewing scene: you’re the only functioning historic brewery in Canada. I’ve enjoyed your beer (on a few occasions) and honestly, I have asked, “Why don’t more people know about this pint-worth-of-awesome? Wouldn’t it be cool to let the world know that, right now, in the 21st century, there was a 19th century brewery in operation that made quality beer?”

See, this is the beautiful thing about living in the 21st century: we have an app for that. It is a social media tool that takes all the coolness of Instagram and throws in one more ingredient—beer. Welcome to Untappd: a social network built for people who love beer.

Untappd was developed for lovers of beer, cider, and mead. Whether you enjoy sampling unique brews from around the world or prefer more mainstream libations, Untappd connects you with fantastic beers and the breweries behind them. Reviews comprise the core of the app. When your first round arrives, you search for your beer in the Search bar across the top. Once you tap your beer from the list of results, you select “Check-In” and are offered a field where you can: 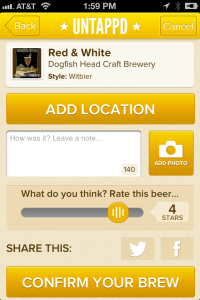 This app, however, is more than a journal of beers you’ve sampled. It’s also a passport to different beers and breweries. By accessing your location, you can see what other users think of the featured brews at pubs in your area. Untappd also offers an option to crowdsource your choice in drinks with Trending Beers. Pulling from the entire network, you can see which beers are particularly popular, and use “Find It” to see if they’re at your current location or somewhere close.

Then there are the badges: your achievements in responsible beer drinking.

Taking a page from various geotagging networks, Untappd incorporates a collection of badges unlocked by meeting challenges put together by the network’s creators. My particular favourite earned so far has been the “Drink Like a Kiwi” honour, awarded after having at least five beers brewed in New Zealand. Perhaps my proudest, though, was when I enjoyed my 100th unique brew, levelling me up from the “Journeyman” status to the “Artisan” title.

And to add to that bragging right, my 100th beer was the Black Creek Historic Porter. All part of my cunning plan.

I’ve been tapping into the fun of the Untappd app since March of last year. It’s been great for tracking old beers and learning about new ones—including the offerings from the Black Creek Historic Brewery!

In sum, then, you can use Untappd to:

Sharing news and reviews keeps the craft brewing scene strong—something to which we can all raise a toast!

When he’s not enjoying the odd pint or four, Tee Morris is an award-winning writer and podcaster of fiction. The Ministry of Peculiar Occurrences series, written with his wife, Pip Ballantine, is about to see their third adventure, Dawn’s Early Light, hit bookshelves in March 2014. Their companion podcast, Tales from the Archives, also offers a window into their steampunk world. He enjoys life in Virginia alongside Pip, his daughter, and three cats.

PS. Did you know that TWO of Black Creek’s Beer Experts have connections to Tales from the Archives? Katie’s written for the podcast, and Blythe has lent her considerable acting talent!