Hello readers! You may remember our previous beer writer Katie’s informative post about medicinal beers used in Victorian times. If there’s one thing i’ve learned about beer in the 19th century, it was not just a social drink. It had many purposes, including health benefits.

In her post, Katie had done some research about how beer was beneficial to 19th century Canadians:

For nineteenth century Canadians, beer supplemented the diet. Beer contains several of the B-complex vitamins (not thiamine, alas), and depending on style, can be a source of iron, too. In her Female Emigrant’s Guide (1854), writer Catherine Parr Traill laments the comparative lack of private brewing among families, explaining: “During the very hot weather, some cooling and strengthening beverage is much required by men who have to work out in the heat of the sun; and the want of it is often supplied by whisky diluted with water, or by cold water, which, when drunk in large quantities, is dangerous to the health, and should, if possible, be avoided” (Parr Trail, The Female Emigrant’s Guide, 137). Beer was not only thirst-quencher, but fortifier.

Katie also mentioned a few different types of medicinal beers: ginger beer, dandelion beer, root beer, and spruce beer. Let’s take a look at each of these types of beer, as well as their intended purpose in the 19th century.

Ginger Beer
Ginger beer was thought to combat nausea and other stomach problems. Ginger is also an anti-inflammatory, which was especially appealing to those with arthritis and chronic pain problems that could not just take pain medication to ease their inflammation. Of course, a real Victorian ginger beer brewed with generous amounts of real fresh ginger is much more likely to live up to these expectations than a store bought ginger ale soda would.

Dandelion Beer
We have actually made our very own dandelion stout at the Black Creek historic brewery in years past. Dandelion was a popular medicinal ingredient in Victorian times, as it was thought to cleanse the kidneys and liver, and prevent kidney stones. Dandelions contain a number of vitamins, and were also extremely easy to find and harvest. Dandelion wine was a more common choice, but dandelion beer did exist as well. Many websites dedicated to making homemade dandelion wine for health purposes exist today, showing that the tradition of using dandelions in beverages still stands.

Root beer is a beverage traditionally made with sassafras roots and/or sarsaparilla as its main flavouring agent. The Indigenous populations of North America were making sassafras-based beverages long before European contact, using it to treat various ailments from wounds to fevers. Unsurprisingly, then, when “root beer” began to be sold through the mid-nineteenth century, it was touted as a healthful drink.

Of course, this is a little ironic as it was later discovered that sassafras is actually carcinogenic, enough so that it was banned by the FDA in 1960.

Spruce Beer
Spruce beer is a beer I get asked about quite a bit down in the brewery,  and many people ask if it actually was used to prevent scurvy. The answer is yes, as explained by our previous beer writer Karrell:

Colonial soldiers learned from the First Nations peoples that spruce could prevent and cure scurvy: a scourge of mariners and soldiers alike prior to the 19th century.  Scurvy was recognized as a disease caused by a lack of fresh fruits and vegetables, but it wasn’t understood to be caused by a deficiency of Vitamin C until 1932!  Thus, while soldiers and sailors didn’t know that spruce was an excellent source of Vitamin C or why Spruce Beer kept scurvy at bay, they did know it was good for what ailed them!

We’ve actually made our own spruce beer in the historic brewery, but it had a taste that didn’t agree with everyone. Apparently, it tasted quite similar to a liquid Christmas tree!

So there are some great examples of some medicinal beers that helped the Victorians cure what “aled” them! Of course, it’s much more beneficial to use modern cures for what currently ails you, but it’s interesting to see how resourceful Victorians managed to make medicinal ales out of everything from dandelions to spruce needles! Many of these recipes can be found online if you’re curious, but maybe just stick to the pharmacy when you’re feeling under the weather.

The Halfway House is a very unique building here at the village. The Halfway House could be found on a stagecoach line between St. Lawrence Market in Toronto and the village of Dunbarton, near Pickering.  It was a great place to stay after a long journey, complete with a taproom to have a beer at the end of the day. Now, the Halfway House has a new lease on life as one of our most impressive historic buildings here at the village, and the site of the Black Creek Historic Brewery. This blog has showed you all the ins and outs of the historic brewery, so let’s shine a spotlight on a different part of Halfway – the taproom!

So what historic goodies can be found in our taproom? Let’s take a look:

Crokinole – Crokinole is a perfect choice as a taproom game, as it was thought to be invented in Ontario in 1876. Crokinole was a popular parlour game in the Victorian times, and is still played today. The game is similar to the idea of curling, with players sliding their pieces into the areas that get the most points.

Historic Glassware – So not all of this glassware is historic (definitely not the clear, modern looking glasses there) but check out those historic glass bottles! According to the Society for Historical Archaeology, black glassware such as the bottles in the taproom are some of the oldest types of colored glassware. Black glassware was excellent for keeping light from spoiling wine and beer, similar to brown or dark bottles today.

The Black Creek Gazette – So this is not a historic artifact, but a fun addition to the taproom. The “Black Creek Gazette” outlines some important late 19th century events that would have taken place around the time period of the village. It’s very interesting to see what was happening at the time, including the Civil War, labor movements, and of course Confederation! 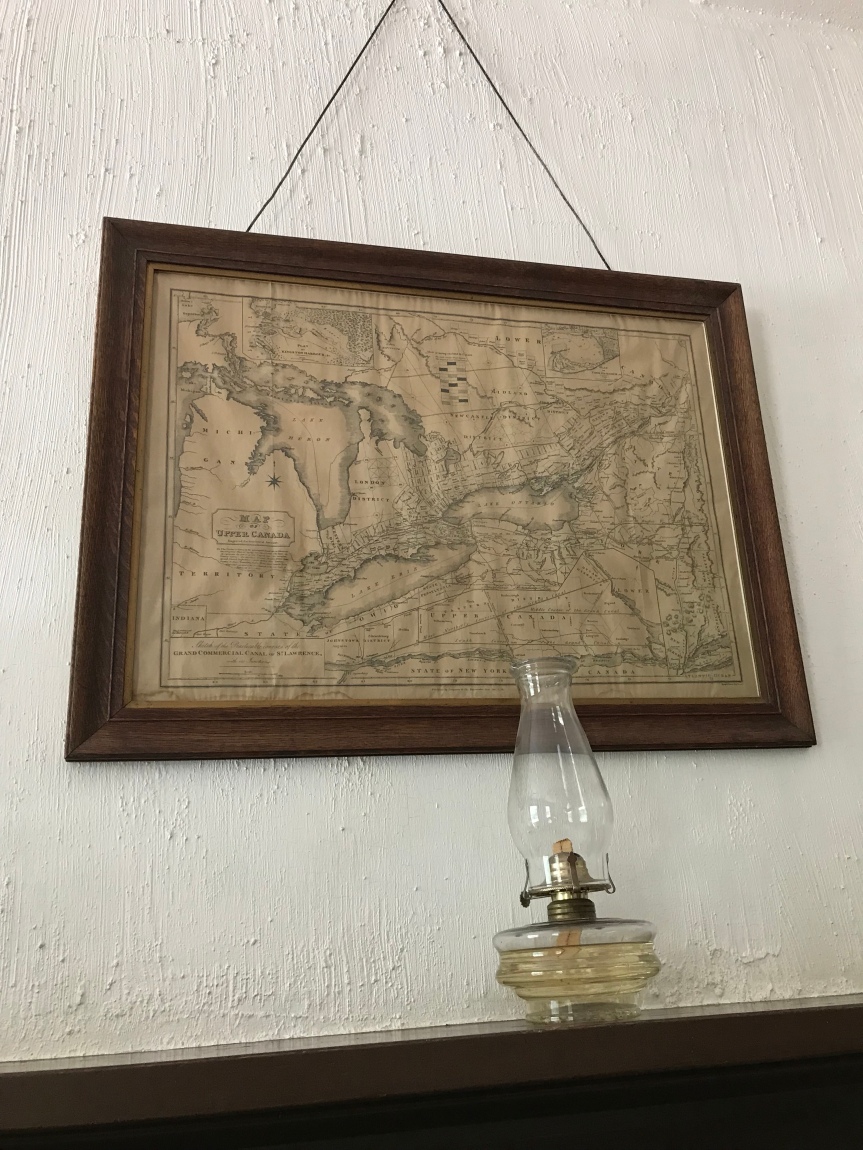 Map of Upper Canada – As many of us know, Ontario was not always “Ontario” but “Upper Canada” instead. It was called Upper Canada due to its position relative to the Great Lakes. Our neighbor to the east, Quebec, was known as Lower Canada.

The Drunk Door – This is a really interesting one. This side door is thought to be a “drunk door.” So when someone got too drunk, instead of sending them out the front door of the inn (potentially harming the reputation of the establishment), they would instead be sent out of a side drunk door. I have never seen this door used before, but it would infact lead to the side of the building, out of sight from the main porch. 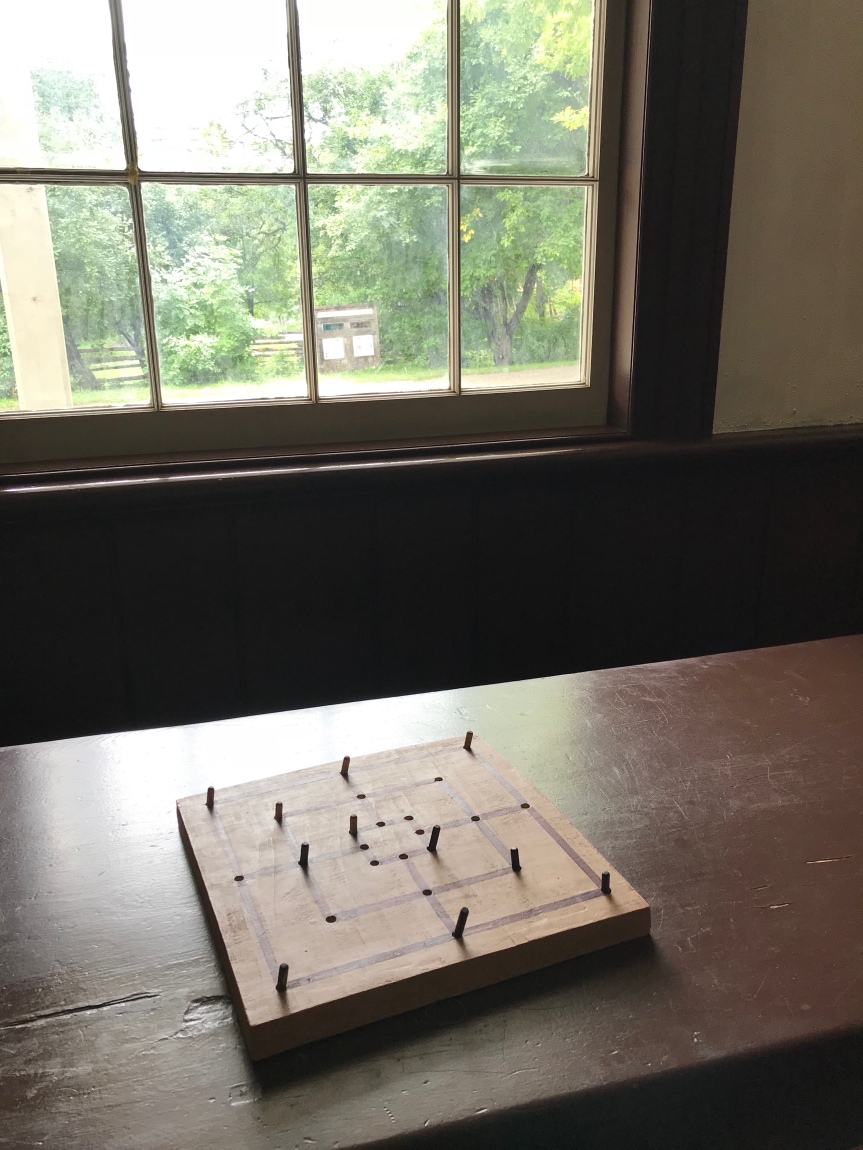 So there you have it! This is definitely not the extent of the cool things you can find in the taproom, and in the rest of the Halfway House! Of course, you can also find the historic brewery in the lower level of Halfway as well. Come by and visit us!

Fall is coming! Our Pioneer Harvest Festival celebrates all things fall and the harvest season. The Festival is a Mennonite and Pennsylvania-German festival, complete with food, crafts, historic demonstrations, and even a rummage sale! The Festival will be happening September 15th, and you won’t want to miss it! So what exactly is going to be happening at the festival?

For the first time ever, we will also be throwing a Fall Fair on September 16th, with carnival games, harvest activities, and apple bobbing! We will be offering all sorts of fun activities, and even a chance to explore our historic mill.

Of course, we will also have Brewery tastings running from 1pm until close. Be sure to take a little time out of all the fall fun to stop by!

Hello all! Today I have a fun post for you – i’ve dug into our archives and found some of our retired specialty ales to share with you. Some were interesting, some were strange, but all were no doubt delicious.

Lemon Balm Pale Ale (2010-2014)
This was one of our first specialty beers ever! This was definitely a popular one. This pale ale had a hint of lemon thanks to the lemon balm herb that Ed added to the recipe. This beer also had a slight hint of mint. It truly sounds delicious. If we had to resurrect any specialty beers from the past, this would be my vote.

Dandelion Stout (2010)
Dandelion stout was a favorite for medicinal purposes during the Victorian era, as dandelions were thought to cleanse the liver and prevent kidney stones. Ed brewed up a delicious take on a stout, with a little dandelion twist.

Raspberry Porter (2010-2013)
This one sounds delicious. According to our previous beer blogger Karrell, the raspberry porter had “a rich, full bodied taste with a subtle tart finish,” and was even brewed with raspberries picked from the village! There was even a short lived chocolate raspberry porter brewed in 2012.

Spruce Beer (2011-2013)
This spruce beer was brewed for our Battle of Black Creek event. It’s very historically accurate, as soldiers actually would have been drinking spruce beer to prevent health issues such as scurvy. However, Ed has told me that this beer tastes like a liquid Christmas tree. Perhaps not for everyone!

One Mile/Estate Ale (2011-2012)
This was a great little experiment we undertook between 2011 and 2012. The goal was to produce a beer with all the ingredients grown at the village! Of course, this was very hard work and extremely difficult to manage, so this was a specialty brew for only about a year.

Sweet Potato Ale/Potato Stout (2013-2017)
Who knew potato goes with beer? We brewed a variation of a potato beer for a few years, where some of the barley in the mash was replaced with potatoes. In Victorian times when many farmers would brew their own beer, they could replace some of the barley in their mash with a starch such as potatoes if there was a bad crop or blight one year. However, the potato doesn’t make too much of a difference in the taste of the beer, especially in the stout. I would describe our potato stout as earthy, but very similar to our usual stout.

Sweet/Milk Stout (2012-2014)
This is another one I would have loved to try. Surprisingly, beer and lactose make a good pairing! The addition of lactose gave this stout a rich, silky, and smooth body. Milk stouts were originally brewed to be healthier than a regular stout, thanks to the addition of the lactose.

What an interesting list. Of course, this is not extensive, but these are some of the ones I thought were the most interesting.  Who knows, maybe next year some of these interesting flavors might make a comeback!