It’s almost March Break at Black Creek Pioneer Village! The village has been closed for the season since Christmas, and i’ve been missing the busy feel of being open to the public. Our season officially begins on April 28th, but every year we open up the village for an exciting week of March Break programming. We will be open from Monday, March 12th to Sunday, March 18th. Not only do kids get in free when accompanied by an adult, but we have a ton of exciting things planned for visitors that stop by. In fact, we will have a March Break mystery for junior detectives to solve. To solve the mystery, you’ll have to hunt for clues and question suspects around the village. Unfortunately, our historic brewery won’t be open for March Break, but will open for the season on April 28th along with the rest of the village!

To celebrate our March Break mystery, here’s a beer mystery from the archives. Our previous beer writer Katie wrote an excellent piece about a case of potential death by beer. Was a poisonous small beer truly behind the death of Thomas Thetcher? Read on to find out… 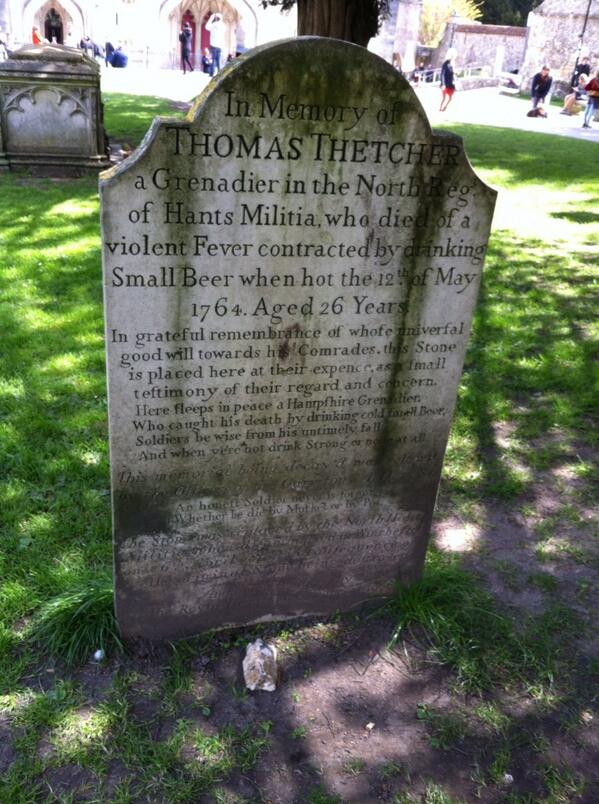 It all started with this photo: My boss sent it to me, adding, “…read as much of the small print as possible.”

Luckily for my eyes, the full text is available elsewhere:

In Memory of Thomas Thetcher a Grenadier in the North Reg. of Hants Militia, who died of

a violent Fever contracted by drinking Small Beer when hot the 12 May 1764. Aged 26 Years.

In grateful remembrance of whose universal good will towards his Comrades, this Stone is placed here at their expence, as a small testimony of their regard and concern.

Who caught his death by drinking cold small Beer, Soldiers be wise from his untimely fall

And when ye’re hot drink Strong or none at all.

What? How did the beer kill him? Did it have something to do with the temperature, or was it the “small” (low-alcohol) nature of the beer? Your trusty beer journalist cannot resist a history mystery like this, so of course I’ve spent the last three days digging. What killed Thomas Thetcher?

Future history PhD student at the University of North Carolina at Chapel Hill. Currently at Black Creek Pioneer Village, working in the brewery and all around the historic village. View all posts by Dani