At this time of year, it can be hard to imagine gardens full of fresh fruits and vegetables. Luckily, we have other options: importing and indoor agriculture among them. The Victorians were not so fortunate. Preserving and pickling offered some access to fruits and vegetables through the winter, but malnutrition remained a risk. Those undertaking long ocean voyages were even more at risk—even in fine weather, produce could not be stored on-board for long periods, which could lead to sailors getting scurvy.

Beer to the rescue!

Spruce beer is beer brewed with the needles, shoots, buds, or inner bark of spruce trees. While Jacques Cartier explored the St. Lawrence in the 1530s, the Iroquois shared a scurvy remedy—boiling spruce needles to make a Vitamin C-rich tea. By the 1700s, the British Navy was making an alcoholic version, brewing beer with evergreen needles and shoots.

Explorer James Cook brewed beer during his voyages to New Zealand—indeed, spruce beer was the first beer brewed in New Zealand. However, the ingredients were slightly different. The spruce trees used by Jacques Cartier do not grow in New Zealand. As an alternative, he used manuka and rimu trees, along with molasses to provide a source of fermentable sugar.

Interestingly, recent scholarship has cast doubt on the efficacy of spruce beer as an antiscorbutic. While spruce does contain Vitamin C, the amounts diminish with fermentation. Anecdotal evidence suggests it offered at least some benefit—not as much as spruce tea, and certainly not as effective as citrus fruits—but enough to slow the progression of scurvy.

Whilst traipsing around the United States, I was fortunate enough to try some spruce beer—and not just any spruce beer, but spruce beer similar to that brewed by Captain Cook. The Wigram Brewing Company is a craft brewery located in Christchurch, NZ: they brewed their first commercial beer in 2001 and officially opened the brewery doors in 2003. (Yes, drinking an NZ beer in the US…long story.) Their James Cook Spruce Beer is a version of Cook’s brew made with rimu and tea tree.

It’s a dark coppery colour on the pour, with a busy nose: there’s quite a bit of caramel/sweet aromas, with just a hint of pines. On first taste, the caramels dominate, and the mouthfeel is thick, nearly syrupy on the palate. The pine comes in the aftertaste—a rush of it rising up through the nose. It’s quite different from our Black Creek spruce beer. The pine isn’t quite as intense, and there’s a slight floral quality that I assume comes from the tea tree.

It’s certainly interesting to try beers from across the world—another benefit to living in the 21st century. Well, that and oranges in February. 🙂

Can we talk about Budweiser’s Super Bowl ad for a minute?

Yes, that Super Bowl ad. See, this one. Right here. It’s only a minute long, so take a quick peek.

Let’s go through it bit by bit.

0:04: Then this flashes across the screen: Proudly a macro beer.

For one second, I am intrigued. Is Budweiser stepping back from claiming to be something it’s not? Are they reclaiming a “negative” label in a thoughtful, respectful, and creative way? After all, some people really like macro beers. That’s fine—we’re totally cool with people drinking whatever makes them happy.

0:06: The Clydesdales! I like the Clydesdales. They remind me of Black Creek’s own Clydesdale, Ross. Maybe this is about putting a new spin on macro beers.

Here is a man drinking beer. The beer is dark, in what appears to be a chalice-style glass, possibly a tulip (hard to tell, with the angle). If this guy is really a beer snob, I hope he’s drinking some variety of Belgian dark ale—it’s often recommended that you serve those in chalices.

More to the point, this man has thick, rimmed glasses, a neat shirt, and a twirly mustache. I think we need a better look at this mustache, actually.

This man is a hipster. Alas, hipsters come with a lot of stereotypes, pretentiousness and self-importance among them. “Thus,” Budweiser says, “if you fuss over your beer, you share those characteristics.”

At this point, I’m shaking my head, but sure, there are clichés about beer snobs. Down in the Black Creek Historic Brewery, we try very hard to dispel that image. As anyone who’s had a drink with us knows, we have a strict policy of No Judgement.

But this is a Super Bowl ad. Budweiser is defending itself as a macro brewery. I don’t like the stereotype of craft-beer-lovers-as-snobs, because it hurts craft breweries, and I think playing up stereotypes is lazy marketing, but I haven’t popped any veins yet. Mostly, at this point, I’m just wishing we could all leave each other to drink what we like in peace.

Exactly. It’s a thirst-quenching beer. That’s fine. Honestly, if people like the taste of Budweiser, then they should drink it. If they’re okay with it, I might recommend a few craft beers they might also like, but I’m never going to judge someone on their beer tastes, or make them try something. Again, that’s not our policy.

Alas, judgement is Budweiser’s policy, but again, it’s a Super Bowl ad. I do understand why a company isn’t saying, “Let’s spend a fortune to tell people to drink whatever they want!”

Unfortunately, it’s about here that logic flies out the window. 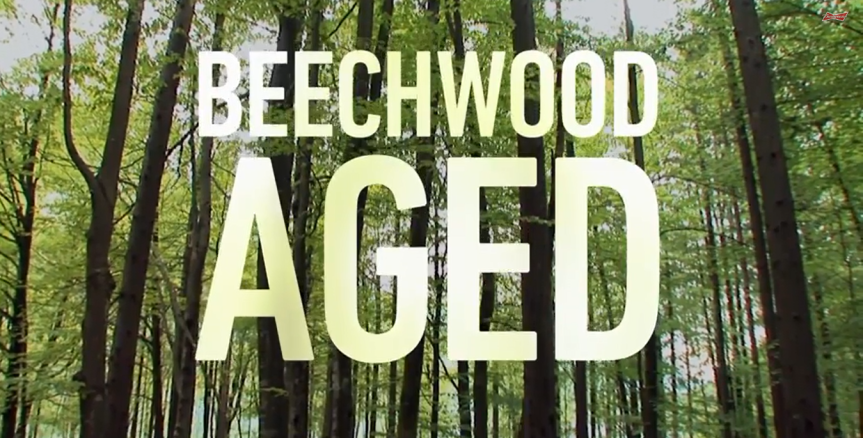 But…I thought we’re not fussing over Budweiser? Why, then, do we care about its beechwood aging? Isn’t that something that (gasp) craft beer lovers might care about?

(My author alter-ego would also like to point out that the phrasing makes it sound like Budweiser has been aging its beers since 1876—as in, for 139 years. That would be quite a beer.)

0:27: It’s brewed for drinking, not dissecting.

Oh, look, more hipsters. You can tell because they are all bespectacled, and they are sharing a flight that arrived on a wooden board with different glassware for each style.

Here, I would like to point out that “drinking” and “dissecting” are not mutually exclusive. Part of the enjoyment of drinking beer (for us, anyway) comes from figuring out what those flavours and aromas are. Admiring the way ruby highlights come through a dark porter is part of the package that makes beer appealing to all the senses. Taking that first sniff is another thing that you can enjoy.

Budweiser is also aware that to distinguish all of these flavours, aromas, and characteristics, you do have to drink the beer, right?

Are people who are filmed with a blurriness strangely reminiscent of intoxication. Interesting subtext. I kind of prefer the hipsters’ airy, brightly-lit brewpub, myself. Although, I’ve suddenly realized: the only females we’ve seen in this ad are women serving Budweiser. We haven’t seen any girls drinking beer, either. Even the hipsters are all male. 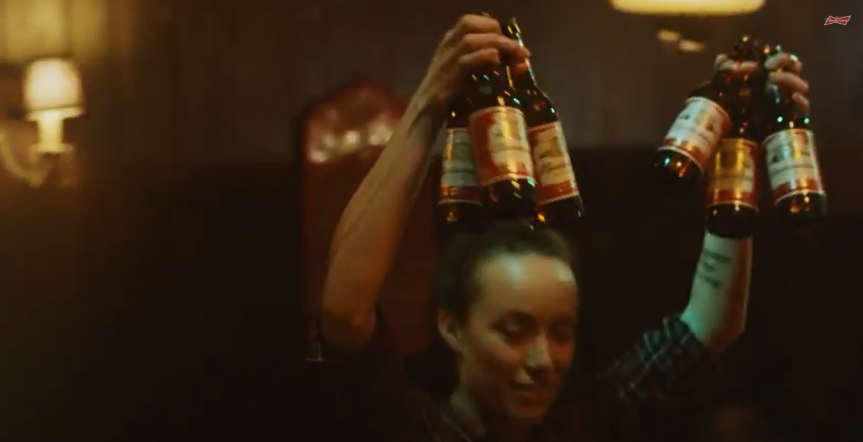 I guess women don’t drink beer? And I guess they don’t hang out with nerdy hipsters, so clearly, you have to go to the blurry bars to find them. I almost typed all that with a straight face, but then I didn’t.

The thought of Budweiser seeing me pour samples in my hoops makes me smile.

0:34: The people who drink our beer like to drink beer.

If I have this right…the ad is saying that the people who fuss over and dissect beer, who pay so much attention to detail, including the proper glassware…don’t like to drink beer.

I have several things to say about this. First, I feel bad for our poor hipsters. I’d also like to look at the specific word choice of “sip.” Sipping” is restrained. It is controlled. It is quiet. It is deliberate. It also prolongs the time it takes to drink your beverage, which means it takes you feel its effects more slowly. It also means you drink less beer.

Clearly very different from the blurry, raucous bar of a few scenes prior, where partying blokes and lads are buying lots and lots of Budweiser. Also—so, let’s say a guy prefers the airy, brightly-lit brewpub? Does that make him less manly?

No, it means he prefers airy, brightly-lit brewpubs. I shake my head again.

The other hilarious thing about this bit is that Pumpkin Peach Ale actually exists. Elysian Brewery, a craft brewery in Seattle, brews a pumpkin/peach brew called “Gourdgia on My Mind.” To cap it off, Anheuser-Busch is in the process of acquiring Elysian.

So…they just insulted a beer…made by a brewery…that they will soon own….

But wait. Maybe they didn’t know about Elysian’s brew. Maybe they were trying for absurdity and it’s all a coincidence.

Proper grammar is also for hipsters.

For whom, exactly? For the people that already drink Budweiser? I assume so, because I certainly don’t think that they’ve won over any craft beer drinkers with this ad. Which means, essentially, they spent $9 million telling people who already drink their beer…to keep drinking their beer.

At first, I was inclined to approach this ad with our usual no judgement attitude. Some people genuinely like Budweiser, or Coors, or whatever macro beer you care to name. That is fine. Drink what you like, in the most literal sense. But this is where idealism hits reality:

Ideally, we’d all just happily drink the beers that make us happy. Realistically, beer is big business. I will support people’s right to drink whatever they like, but I can disagree with macro-breweries’ interactions with craft breweries: whether through ads like this, buyouts, or sweetheart deals with the LCBO that hamstring smaller brewers.

Two different things: the drinkers and the business. At the end of the day, though, this ad gives an awful lot of exposure and attention to craft beers—ironic, considering that it was supposed to be about Budweiser.

And now…I think there’s a honey-ginger winter warmer in my fridge that needs dissecting. 😉