Our historic brewery in the heart of Black Creek Pioneer Village is still shuttered for our winter break (though young detectives have been having a wonderful time assisting Sherlock Homes!). But never fear—we’ve kept ourselves busy.

The Irish Potato Stout is our latest LCBO offering. This is a traditional Irish Stout—perfect for St. Patrick’s Day! The addition of potatoes not only adds to the rich flavour, it adds to the history!

By which I mean the Great Famine of ~1845-1851. Through a number of factors, most of the Irish labouring class had become reliant on the potato as their main food source. The Penal Laws of the 17th and 18th centuries had prohibited Irish Catholics from entering professions, obtaining an education, and had restricted where they could live. Even after the Catholic Emancipation Act of 1829, the Irish peasantry had few economic, social, or educational opportunities.

Under a system of largely absentee landlords, most Irish labourers farmed only small strips of land for themselves. For them, the potato was the perfect crop: it was cheap, required little space or maintenance, was reasonably nutritious.

Then the blight came.

But long-standing prejudice and unshakeable faith in the principle of laissez-faire hindered such efforts. In 1846 new prime minister Charles Trevelyan fretted over the possibility of Ireland becoming “habitually dependent” on Britain (not that Britain had absorbed it into the United Kingdom or anything…). Far better to have “Irish property support Irish poverty.”

During the “famine,” some £1,000,000 worth of Irish grains were exported to Britain. So, there was food in Ireland—but little of it reached the Irish poor. There is perhaps an aptness to the Irish term for the famine: an Gorta Mór – the Great Hunger.

By the early 1850s, Ireland’s population had been halved through death and emigration. A large number came to Canada; in “Black ’47,” over 38,000 Irish refugees arrived in Toronto – which at the time had a population of just 20,000.

You can ponder this as you try our Irish Potato Stout. Brewed to 5% ABV, it’s a deep brown colour. I couldn’t see through it, but it’s not quite as dark as our usual stout. Roasted malt aromas struck me at first sniff and carried over into the taste. It’s a rich, complex beer—that roasted character mellowed to something almost like chocolate as it travelled over the tongue, finishing with a smoky earthiness. 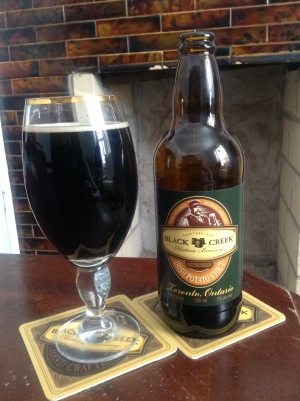 It’s got a thick, heavy mouthfeel; there was a lovely fullness at the back of the throat and up into the nose. Still, carbonation gives it a slight edge (you know you’ve become accustomed to historic beers when bubbles surprise you!).

Overall, it’s a very satisfying, stick-to-your-ribs kind of beer. I could probably drink it for supper, but since I’m a lightweight (in more ways than one), I think I’ll save some for an Irish lamb stew!

The Irish Potato Stout is available at select LCBO stores for a limited time – get yours before they run out!

View all posts by ktbryski