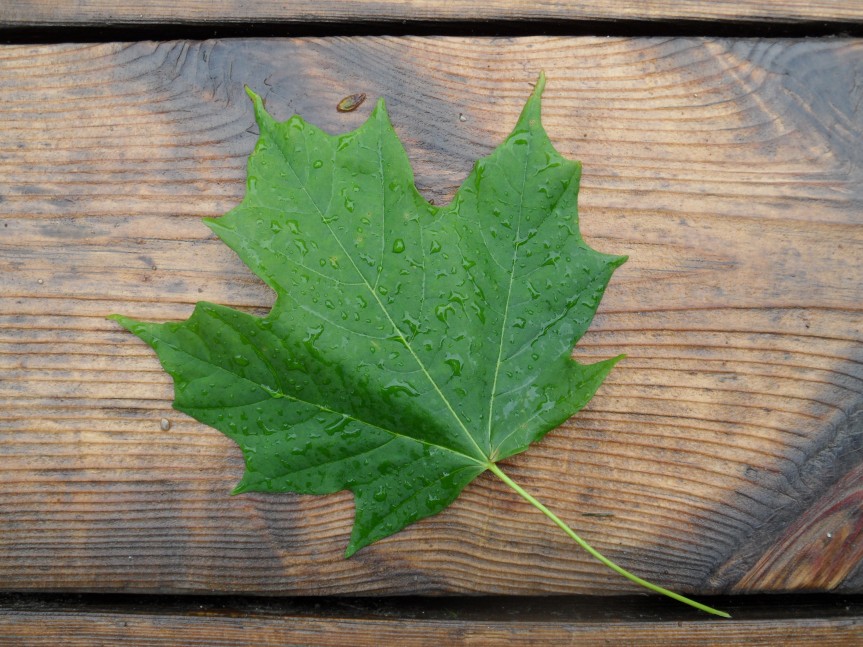 In honour of Canada Day next Friday, Ed is brewing up a special beer.  He’s making an oh-so-Canadian Maple Porter using locally made maple syrup!  Ed is expecting a deep mahogany brown beer with subtle chocolate notes complimented by a hint of maple syrup.  This special brew will be available only at the historic brewery at Black Creek Pioneer Village beginning on Canada Day – July 1st as long as supplies last.

Recipes for maple beers are not very common in the Victorian period, but they certainly existed.  Once such recipe appeared in the Young Housekeeper’s Friend in 1846.

Maple molasses is simply maple sap boiled until it reaches the consistency of molasses, thicker than syrup, but not boiled down to sugar crystals.  This recipe calls for neither barley nor hops, but many recipes did.  A recipe for maple beer that appeared in The Balance, and Columbian repository, Volume 4, a magazine from 1805, notes that malt or bran may be added to the beer.  In The Backwoods of Canada,  Catherine Parr Traill’s maple beer recipe called for no barley, but she saw hops as an essential ingredient.  Recipes for maple vinegar were quite common in the early 1800s when commercially produced vinegar was expensive and hard to obtain in the backwoods of Canada.  Housewives and brewers would have had to be careful when brewing beer and vinegar in the same household, as the yeast that makes vinegar is different from the yeast that makes beer, though they act on the same principle ingredients.  The brewer would have to be careful or everything he or she brewed would turn to vinegar!

So, next week come celebrate Canada Day at Black Creek Pioneer Village and stop by our historic brewery to pick up a bottle of Maple Porter!

This weekend, to celebrate our Battle of Black Creek Revolutionary War Re-enactment, Ed has brewed up a batch of Spruce Beer.  Spruce Beer was known to prevent and cure scurvy, a scourge of mariners and soldiers alike, prior to the 19th century.  Scurvy was recognized as a disease caused by a lack of fresh fruits and vegetables, but it wasn’t understood to be caused by a deficiency of vitamin C until 1932!  Thus, while soldiers and sailors didn’t know that spruce was an excellent source of vitamin C or why spruce beer kept scurvy at bay, they did knew it was good for what ailed them!  In North America, spruce beer was brewed in the home and on the march.  Spruce beer was on order for the “Health and Conveniency of the Troops” under the command of British General Amherst in North America in 1759.  He also authorized sutlers (merchants who travelled alongside the military) to brew as much as they desired to add to the supply (for more information about General Amherst’s forays in North America; check out his general orders to the troops, published in Commissary Wilson’s orderly book, available online here).  His personal recipe is preserved in his journal, published by his descendents in the 1930s.

Take 7 pounds of good spruce & boil it well till the bark peels off, then take the spruce out & put three Gallons of Molasses to the Liquor & boil it again, scum it well as it boils, then take it out the kettle & put it into a cooler, boil the remained of the water sufficient for a Barrel of thirty Gallons, if the kettle is not large enough to boil it together, when milkwarm in the Cooler put a pint of Yeast into it and mix well.  Then put it into a Barrel and let it work for two or three days, keep filling it up as it works out.  When done working, bung it up with a Tent Peg in the Barrel to give it vent every now and then.  It may be used in up to two or three days after.  If wanted to be bottled it should stand a fortnight in the Cask.  It will keep a great while. – Journal of General Jeffrey Amherst

Ed’s brew uses barley and molasses from a later recipe, that was designed to produce a more palatable beer.  Ed describes the beer produced by the above recipe as tasting like “drinking turpentine mixed with Vicks”.  For those of you unfamiliar with Vicks, it’s an ointment with a powerful smell caused by two main ingredients – camphor and menthol.  By our time period – the 1860s – spruce beer was still being made, but often with additional ingredients such as oils of sassafras, wintergreen, ginger and substantially less spruce.  Recipes usually called for spruce oil, or essence of spruce – that is previously boiled and distilled spruce oil that could be purchased from the store – and less spruce oil than any other ingredient.  Ed has tried to recreate the ‘hint of spruce’ style that was popular in the 1860s in this brew.  Ed’s Spruce Beer will only be available at Black Creek Pioneer Village (not in the LCBO), and will be ready for sale beginning this Friday, June 17th, 2011.  Why not celebrate Father’s Day by dropping by the Village and checking out the Battle of Black Creek and picking up a growler of Spruce Beer to take home!

Finding information on the earliest breweries in Toronto can be difficult, often the only reason we know they existed is through passing references; a record of a debt owed to a brewer, an invoice, a mention of occupation in a legal document.  Such is the case with early breweries such as Shaws and Hugills.  In fact, the only reference I have come across to these two breweries is in Henry Scadding’s Toronto of Old, where he mentions them by name three times and never elaborates on their location, date, or products!  On the contrary, we know something about John Doel and his brewery because the man himself became a noted citizen in the history of the city.

John Doel was born in Somersetshire, England and emigrated to York in 1818 via Philadelphia.  Soon after his arrival he engaged in the brewing business, first on Sherbourne (then Caroline Street) and later at Adelaide and Bay.  The second brewery on the northwest corner of Adelaide and Bay was built in 1827 alongside his home.  The brewery apparently brewed beer of ‘good repute’ until it accidentally burned in 1847.  Had it not been for Doel himself, we would likely know little if anything about his brewery.  He first made a name for himself as the only letter carrier in York, a position he held between 1825 and 1830.  Subsequently, his political leanings as a Reformer led him to associate with William Lyon Mackenzie, and his brewery became part of history when it was used as a meeting house by Mackenzie as he attempted to unite and organize the Reformers in York into a coherent political party.  Doel and Mackenzie suffered a falling out prior to the events of December 7, 1837, and thus he and his brewery were not involved in the events that followed (click here to learn more about Mackenzie and the Rebellion of 1837) .  After the burning of his brewery in 1847, Doel retired from the brewing industry and became a well-respected citizen in the community.  He served as an alderman as well as a justice of the peace prior to passing away in 1871 at the ripe old age of 81.  His house at Adelaide and Bay survived until 1925 when it was torn down to make way for the Northern Ontario Building which still stands at the site.  GBC over at Lost Toronto has created an awesome photo montage that traces the evolution of the site over the years.  You can check it out here.